You learn and at the same time have a lot of fun in a refreshing and lively way.
You experience the language with all your senses with the linguistic dramaturgy.
You are promoted individually.
You learn at your own pace.
You progress quickly.
You learn specific situations of your everyday life.

Does that appeal to you? Then this German course is for you.

The method you use in your German course has been specially developed for teaching adults. Through individual and group exercises, you will develop your feeling for the language, your attention to the peculiarities of the German language and your ability to express yourself orally. Working in a small group and in a pleasant atmosphere encourages free and spontaneous speaking. The instructor adjusts herself individually to your level as a learner and your learning rhythm.

Language acquisition is an experience full of joie de vivre and creativity, involving all the senses.

The lessons take place daily from 9 am to 2 pm.

In the afternoons and evenings there are joint excursions, swimming, hiking, relaxing under fruit trees, sitting together at the campfire and cooking together.

Excursions and food for grilling and cooking are not included in the course fee. There are additional costs.

Even as a child, I loved the idea of ​​speaking in other languages than my mother tongue. As many children do I invented “nonsense languages”, which then fulfilled great parts of my childhood. By doing so, I have always felt like a completely different person. Intuitively, children realize that a language is more than just the words. Using the “foreign” language they are able to metamorphose. As a language is also a way of thinking and feeling. It reflects the social structures and physical, psychological, emotional possibilities enriched with images and symbols. Often, what has not been said ‘between the lines’ gives more information than the words actually spoken. Learning a foreign language opens also a door to the culture of the people who speak the language.

I am a foreign language correspondent, theatre pedagogue, certified lecturer for German as a foreign language in adult education and trainer for language dramaturgy. Since 2012 I have been leading German courses at various locations of the Berlin VHS. 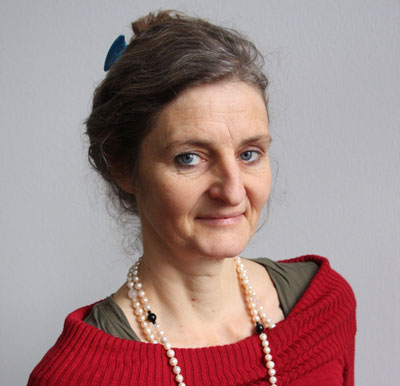 The language holidays and weekend courses take place in a small atmospheric seminar house in a nature reserve north of Berlin. The beautiful landscape invites you to go hiking. In summer you can go swimming in one of the surrounding lakes. In addition, there are some destinations that are worth a visit.

Further information about the venue can be found at www.wildsau-brodowin.de

Via A 11 to Joachimsthal
B 198 direction Angermünde until the B2
B2 direction Berlin. After the railway tracks direction Brodowin turn left into the forest.

Arriving by train and bus:

R3 to Eberswalde. From there by bus 912 direction Brodowin to “Ziegenberg”.

Arrival by train and bicycle:

R 3 to station Chorin. From there by bike.

Course participants can be picked up by arrangement from the train station.